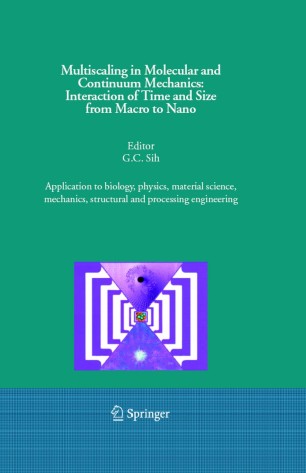 Multiscaling in Molecular and Continuum Mechanics: Interaction of Time and Size from Macro to Nano

This volume on multiscaling has been motivated by the advancement of nano-technology in the past four decades. In particular, nano-electronics has paved the way to show that the behavior of nano-size bodies are not only different from macro-size bodies but they do not obey the same physical laws. There appears to be a mesoscopic region which separates the laws of quantum physics and continuum mechanics. A gap has been left in the full range of scaling from macro to nano. Micro-manipulation can be made more effective if the atomic and molecular scale activities can be identified more precisely with the use specific objectives. In this respect, material science has already benefited by positioning and structuring of nanometer-scale particles to arrive at the desired macroscopic material properties. The idea has been implemented to tailor-make structural materials for the Boeing 787 to better accommodate non-uniform stress and strain at different locations of the aircraft. Explored are also the possibility of coaxing DNA-based organisms such as viruses to improve performance of batteries, solar cells, fabrics, paints and other kinds of materials. The potential of assembling bio-molecules to build electronic components is also in the planning. The manipulation of molecules and atoms has been regarded as a common base for both material and life science. Quantum and continuum mechanics are being applied side by side for exploring the behavior of small and large objects moving at fast and slow speed.