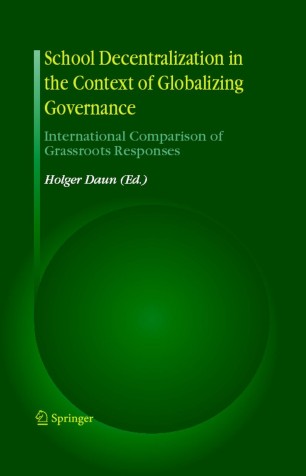 School Decentralization in the Context of Globalizing Governance

Decentralization has become a globalized policy: a large number of countries around the world have formulated this policy and many also have implemented it. The policies and the changes at the national level have been researched and thoroughly described and analyzed. What has taken place and is taking place at the grassroots level has not received attention until recently.

The book makes an overview of the world wide economic, political, cultural and educational changes since the beginning of the 1980’s and presents the new type of educational governance. It describes the processes of globalization and how national education systems have responded to these processes. It argues that symbolic world models (for the way of organizing national societies and education) have emerged in international agencies and how these models are borrowed, imitated, imposed and so on, when different countries reform their primary and secondary education.

It also presents grassroots cases from different countries against the background of the overall changes in governance philosophy and applications. It reviews literature and reports on decentralization in the wider context of educational restructuring and gives a detailed account for different types of decentralization and their short and medium term impact. Also, it presents case studies from countries in Africa, Europe and Latin America and describes what is taking place at the local levels. Focus is directed towards the outcomes in terms of: parent and teacher participation in school.

Therefore, the book is useful for scholars as well as students in higher education and teacher training.

"…I think this book is of great importance globally. It should appeal to policy makers, teacher educators and school administrators around the world"