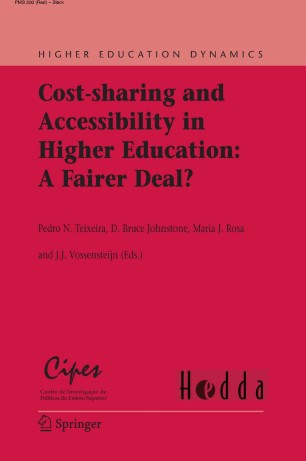 Cost-Sharing and Accessibility in Higher Education: A Fairer Deal?

Higher education finances lie at the crossroads in many Western countries. On the one hand, the surging demand of the past three or four decades, driven by a belief in higher education as a principal engine of social and economic advancement, has led to dramatic growth of the higher education systems in these countries. On the other hand, this growth in demand was accompanied by rapidly increasing per-student cost pressures at a time when governments seemed increasingly unable to keep pace with these cost pressures through public revenues. Hence, worldwide, the most common approach to the need for increasing revenue was to use some form or forms of cost sharing, or the shift of some of the higher educational per-student costs from governments and taxpayers to parents and students. This raises several important challenges to higher education systems. First, there is the political and social controversy associated with most forms of cost-sharing, particularly with tuition fees. Secondly, there are important issues in terms of the broad context of social policy, such as the role of families and students and the relationship that the state establishes with each of them. Third, there is the comparison of alternative instruments of cost-sharing and the direct and indirect effects of each of them, notably in terms of educational equality. Overall, underlying cost-sharing debates are fundamental questions about social choice, individual opportunities, and the role of government in society.