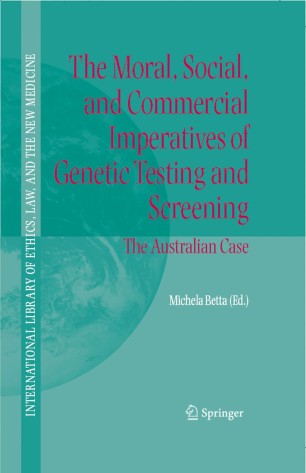 The Moral, Social, and Commercial Imperatives of Genetic Testing and Screening

Part of the International Library of Ethics, Law, and the New Medicine book series (LIME, volume 30)

This is a dynamic book that successfully combines global and local thinking with regard to an emerging technology that will contribute to the expansion of proteomics and pharmacogenomics, the science of tailored healthcare and treatments. Genetic testing and screening will change the way people understand health, diagnostic knowledge, illness but also crime, databases and private information, paternity, and self-knowledge. In addition to giving individuals the opportunity to think differently about their well-being, it installs a new taxonomy in terms of illness, because its probabilistic effects will introduce a new narrative in the health discourse of 21st century society. While in the past people could be classified as being healthy or sick, now, through genetic testing and screening, adults can be classified as being healthy, predisposed to an illness, probably at risk, at risk, or carriers of certain risks. The effects of this taxonomy do not remain confined to the individual who is tested but extends to an entire family, as genetic knowledge is family knowledge. But the technology of genetic testing and screening installs a second dramatic register in the prenatal phase when cells and embryos are tested and subsequently altered in order to hit targets of perfection. However, this technology can also be seen as a strategy for the acquisition of new knowledge about oneself, as it instigates a different attitude towards ourselves in a scenario in which the notion of life as a singular noun is seriously questioned by cultural practices that make it necessary to speak of forms of life. The complexity of the Self resulting from this epistemological shift evoke the ancient Greco-roman practices of the care of the self leading to self-knowledge. Genetic testing and screening could therefore be understood as a form of self-quest, and attempt to discover what we are beyond our wishes and desires - beyond what we would like to be.