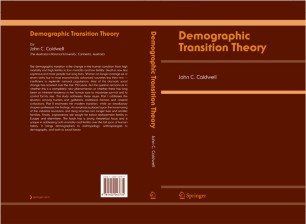 The demographic transition is the change in the human condition from high mortality and high fertility to low mortality and low fertility. Death is now less capricious and most people live long lives. Women no longer average six or seven births but in most economically advanced countries less than two — insufficient to replenish national populations. Most of this dramatic social change has occurred over the last 150 years. But the question remains as to whether this is a completely new phenomenon or whether there has long been an inherent tendency in the human race to maximize survival and to control family size. This study addresses these issues. Part I addresses the situation among hunters and gatherers, traditional farmers and classical civilizations. Part II examines the modern transition, while an introductory chapter synthesizes the findings. An emphasis is placed upon the transmuting of the industrial revolution and rising incomes into longer lives and smaller families. Finally, explanations are sought for below-replacement fertility in Europe and elsewhere. The book has a strong theoretical focus and is unique in addressing both mortality and fertility over the full span of human history. It brings demographers to anthropology, anthropologists to demography, and both to social history.