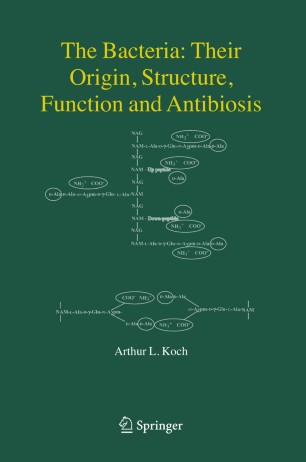 The Bacteria: Their Origin, Structure, Function and Antibiosis

This book may seem like three or four books even though the main - cus is on a specialized topic—the bacterial cell wall. Its job is to formulate the innovations that caused life to initiate on earth, those that caused cell physiology to develop without diversity developing, those that allowed the murein walls of the cells to arise, those that led to the separation of the domain of Bacteria from other organisms, those that allowed the Archaea and the Eukarya to develop independently, and those that then led to the development of a very diverse b- sphere. It must have taken a long time after the origin of the ?rst cell; evolution had to proceed to produce very effective organisms. At some point a collection of very similar organisms arose that were ?rst called collectively the Last U- versal Ancestor (LUA), and stable divergence developed from there. The ?rst bacterium had a protective cell wall and its descendants developed in many - verse evolutionary directions, gave rise to many species of bacteria with various life strategies, and expanded to ?ll the many niches in the collection. As the kingdoms or domains of Archaea and Eukarya evolved, many of these organisms (and even some bacteria) acted against bacteria. The dev- opment of antibiotics acting on the wall of bacteria and lytic enzymes, called lysozymes,producedbyprotozoa,plantsandanimals,ledtodestructionofmany bacteria. Theseantagonisticchallengestobacteriaresultedfromitsowncellwall structure.