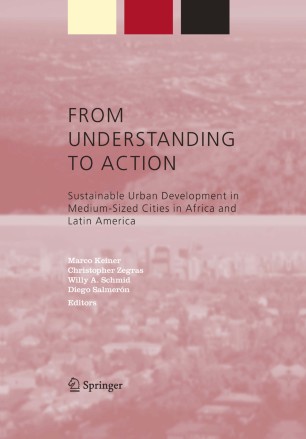 From Understanding to Action

Hans van Ginkel Rector, United Nations University The challenges of the world's future are linked to the growing share of the global population that will reside in urban areas. UN projections indicate that by 2030 the world's urban population share will rise to 60 percent. Of the two billion added to the global population, 99 percent will be added to the urban areas of the world. Of this number, 95 percent will be in countries of the developing world. As most people will live in urban areas we had better work to build and organize them as both attractive and less resource consuming places. That is, to promote sustainable urban development is to promote the creation of dense human settlements that are livable and have reduced their impacts on larger scale ecosystems. While much attention has been focused on the "mega-cities," those with a population of over 10 million, the amount of people living in these places will remain almost constant while the smaller and medium size cities will be the great absorbers of the world's urban population. Indeed, it is predicted that while the absolute number of people that will live in urban centers of 10 million or more will increase from approximately 263 to 375 million between 2000 and 20 IS, their share of the total urban population will only increase from 9. 2 percent to 9. 8 percent, a 6. 34 percent increase.