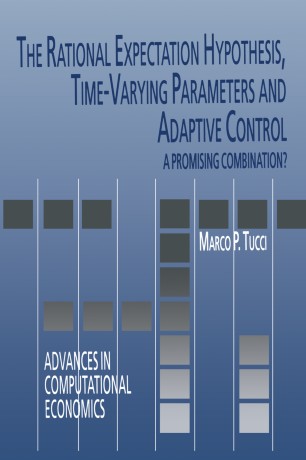 One of the major controversies in macroeconomics over the last 30 years has been that on the effectiveness of stabilization policies. However, this debate, between those who believe that this kind of policies is useless if not harmful and those who argue in favor of it, has been mainly theoretical so far.

The Rational Expectation Hypothesis, Time-Varying Parameters and Adaptive Control wants to represent a step toward the construction of a common ground on which to empirically compare the two "beliefs" and to do this three strands of literature are brought together. The first strand is the research on time-varying parameters (TVP), the second strand is the work on adaptive control and the third one is the literature on linear stationary models with rational expectations (RE).

The material presented in The Rational Expectation Hypothesis, Time-Varying Parameters and Adaptive Control is divided into two parts. Part 1 combines the strand of literature on adaptive control with that on TVP. It generalizes the approach pioneered by Tse and Bar-Shalom (1973) and Kendrick (1981) and one recently used in Amman and Kendrick (2002), where the law of motion of the TVP and the hyperstructural parameters are assumed known, to the case where the hyperstructural parameters are assumed unknown. Part 2 is devoted to the linear single-equation stationary RE model estimated with the error-in-variables (EV) method. It presents a new formulation of this problem based on the use of TVP in an EV model. This new formulation opens the door to a very promising development. All the theory developed in the first part to control a model with TVP can sic et simpliciter be applied to control a model with RE.