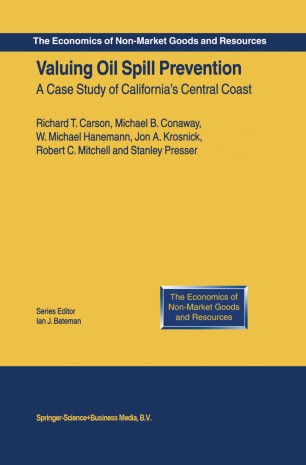 Part of the The Economics of Non-Market Goods and Resources book series (ENGO, volume 5)

On April 22-23, 1988, approximately 432,000 gallons of San Joaquin Valley crude oil spilled from an aboveground storage tank at a Shell Oil Company refinery into the surrounding environment, including the northern reaches of San Francisco Bay (the Martinez spill). Pursuant to the settlement of the resulting litigation (United States/California v. Shell Oil Co., No. C89-4220, (N.D. Cal1990)), Shell Oil Company provided funding for, among other things, studies to improve future response strategies to oil spills and ensure better restoration of resources and services affected by such spills. The California Oil Spill Contingent Valuation Study was one of the studies funded by the settlement. The purpose of the California Oil Spill (COS) Contingent Valuation (CV) Study was "to execute and document a contingent valuation study of natural resource damages associated with offshore, coastal, or estuarine oil spills in California" (State of California, Department of Justice, Contract Number 89-2126). The COS CV study developed an estimate of per household ex ante economic value for a program to prevent a specified set of natural resource injuries to those species of birds and intertidal life that are consistently affected by oil spills along California's Central Coast. The principal investigators on the COS study team were Richard T. Carson of the University of California, San Diego, and W. Michael Hanemann of the University of California, Berkeley. The study's project manager was Kerry M.