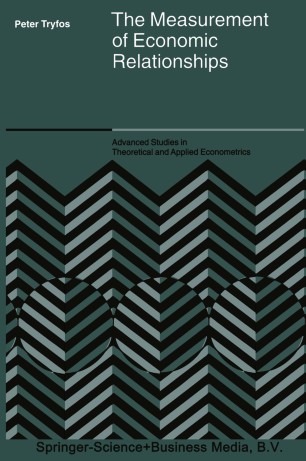 The Measurement of Economic Relationships

Astranger in academia cannot but be impressed by the apparent uniformity and precision of the methodology currently applied to the measurement of economic relationships. In scores of journal articles and other studies, a theoretical argument is typically presented to justify the position that a certain variable is related to certain other, possibly causal, variables. Regression or a related method is applied to a set of observations on these variables, and the conclusion often emerges that the causa,l variables are indeed "significant" at a certain "level," thereby lending support to the theoretical argument-an argument presumably formulated independently of the observations. A variable may be declared significant (and few doubt that this does not mean important) at, say, the 0. 05 level, but not the 0. 01. The effects of the variables are calculated to many significant digits, and are often accompanied by intervals and forecasts of not quite obvious meaning but certainly of reassuring "confidence. " The uniformity is also evident in the many mathematically advanced text­ books of statistics and econometrics, and in their less rigorous introductory versions for students in economics or business. It is reflected in the tools of the profession: computer programs, from the generaiones addressed to the incidental researcher to the dedicated and sophisticated programs used by the experts, display the same terms and implement the same methodology. In short, there appears no visible alternative to the established methodol­ ogy and no sign of reservat ions concerning its validity.