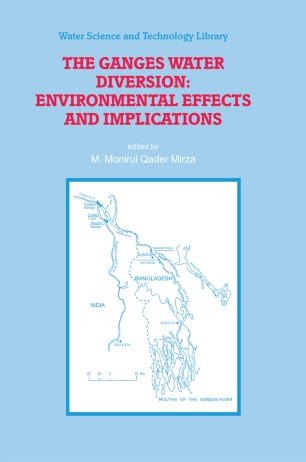 This book deals with environmental effects on both sides of the border between Bangladesh and India caused by the Ganges water diversion. This issue came to my attention in early 1976 when news media in Bangladesh and overseas, began publications of articles on the unilateral withdrawal of a huge quantity of water from the Ganges River through the commissioning of the Farakka Barrage in India. I first pursued the subject professionally in 1984 while working as a contributor for Bangladesh Today, Holiday and New Nation. During the next two decades, I followed the protracted hydro-political negotiations between the riparian countries in the Ganges basin, and I traveled extensively to observe the environmental and ecological changes in Bangladesh as well as India that occurred due to the water diversion. The Ganges, one of the longest rivers of the world originates at the Gangotri glacier in the Himalayas and flows across the plains of North India. Eventually the river splits into two main branches and empties into the Bay of Bengal. The conflict of diversion and sharing of the Ganges water arose in the middle of the last century when the government of India decided to implement a barrage at Farakka to resolve a navigation problem at the Kolkata Port.