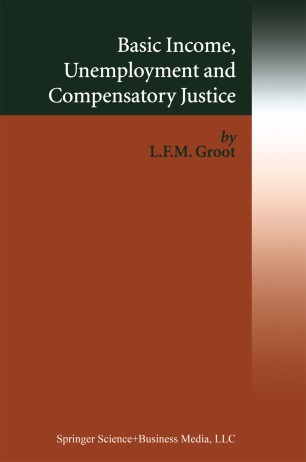 Basic income is a regularly debated topic in various scholarly disciplines (political philosophy, political theory, welfare economics, labour market economics and social policy) and in circles of policy makers, administrators and activists. Since the late 1970s, unemployment is the primary problem for social-economic policy in all welfare states. In Basic Income, Unemployment and Compensatory Justice it is argued that implementing a substantial basic income is the best policy response to deal with unemployment-induced problems such as job insecurity, social exclusion, poverty and lack of compensatory justice on the labour market and to improve labour market flexibility, boost low wage employment and part-time work. Basic Income, Unemployment and Compensatory Justice, with an introductory chapter by Philippe van Parijs, discusses the attractiveness of a substantial basic income to deal with the problem of unemployment, in combination with an ethical perspective of social justice.

Loek Groot is a senior lecturer at the Utrecht School of Economics.

Phillippe van Parijs is Professor of Economic and Social Ethics at the Université Catholique de Louvain, Belgium. His books include Marxism Recycled (1993) and Real Freedom for All. What (if anything) can justify capitalism (1995). In 2001 he received the Prix Francqui for his entire oeuvre.