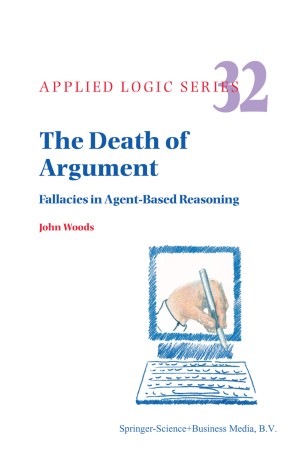 The Death of Argument

Fallacies in Agent Based Reasoning

The present work is a fair record of work I've done on the fallacies and related matters in the fifteen years since 1986. The book may be seen as a sequel to Fallacies: Selected papers 1972-1982, which I wrote with Douglas Walton, and which appeared in 1989 with Foris. This time I am on my own. Douglas Walton has, long since, found his own voice, as the saying has it; and so have I. Both of us greatly value the time we spent performing duets, but we also recognize the attractions of solo work. If I had to characterize the difference that has manifested itself in our later work, I would venture that Walton has strayed more, and I less, from what has come to be called the Woods-Walton Approach to the study of fallacies. Perhaps, on reflection "stray" is not the word for it, inasmuch as Walton's deviation from and my fidelity to the WWA are serious matters of methodological principle. The WWA was always conceived of as a way of handling the analysis of various kinds of fallacious argument or reasoning. It was a response to a particular challenge [Hamblin, 1970]. The challenge was that since logicians had allowed the investigation of fallacious reasoning to fall into disgraceful disarray, it was up to them to put things right. Accordingly, the WWA sought these repairs amidst the rich pluralisms of logic in the 1970s and beyond.