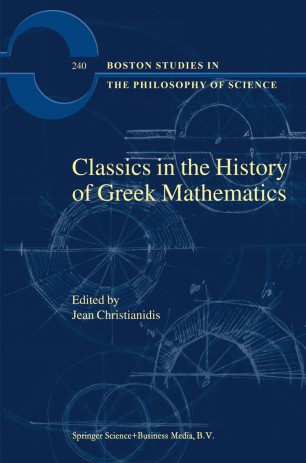 Classics in the History of Greek Mathematics

Part of the Boston Studies in the Philosophy of Science book series (BSPS, volume 240)

The twentieth century is the period during which the history of Greek mathematics reached its greatest acme. Indeed, it is by no means exaggerated to say that Greek mathematics represents the unique field from the wider domain of the general history of science which was included in the research agenda of so many and so distinguished scholars, from so varied scientific communities (historians of science, historians of philosophy, mathematicians, philologists, philosophers of science, archeologists etc. ), while new scholarship of the highest quality continues to be produced. This volume includes 19 classic papers on the history of Greek mathematics that were published during the entire 20th century and affected significantly the state of the art of this field. It is divided into six self-contained sections, each one with its own editor, who had the responsibility for the selection of the papers that are republished in the section, and who wrote the introduction of the section. It constitutes a kind of a Reader book which is today, one century after the first publications of Tannery, Zeuthen, Heath and the other outstanding figures of the end of the 19th and the beg- ning of 20th century, rather timely in many respects.