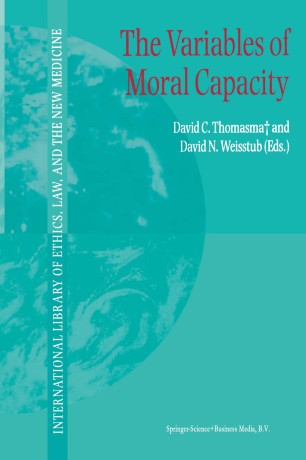 The Variables of Moral Capacity

Part of the International Library of Ethics, Law, and the New Medicine book series (LIME, volume 21)

Moral capacity is an important feature of what it means to be human. In this volume, the contributors have taken on the daunting task of trying to distinguish between legal and moral capacity. This distinction is difficult at times for clinicians, philosophers and legal scholars alike. Part of the challenge of defining moral capacity lies in the difficulty of adequately categorizing it. For this reason, the editors have chosen to divide the book into three parts. The first looks at the concepts involved in the discussion of moral capacity; the second considers the role of moral capacity in the lives of professionals; and the final part reflects on case studies of moral capacity or incapacity illustrating the challenge that moral capacity presents - its definition lying between two seemingly incommensurable models, those of the threshold and continuum.
This volume takes a multidisciplinary approach to the subject, and ties the disciplines of medicine, philosophy and law into the health context. It will be of interest to medical health professionals as well as researchers working in the areas of philosophy and law.