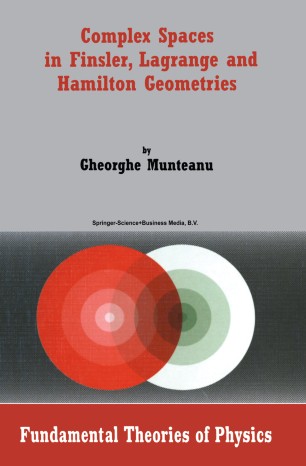 From a historical point of view, the theory we submit to the present study has its origins in the famous dissertation of P. Finsler from 1918 ([Fi]). In a the classical notion also conventional classification, Finsler geometry has besides a number of generalizations, which use the same work technique and which can be considered self-geometries: Lagrange and Hamilton spaces. Finsler geometry had a period of incubation long enough, so that few math­ ematicians (E. Cartan, L. Berwald, S.S. Chem, H. Rund) had the patience to penetrate into a universe of tensors, which made them compare it to a jungle. To aU of us, who study nowadays Finsler geometry, it is obvious that the qualitative leap was made in the 1970's by the crystallization of the nonlinear connection notion (a notion which is almost as old as Finsler space, [SZ4]) and by work-skills into its adapted frame fields. The results obtained by M. Matsumoto (coUected later, in 1986, in a monograph, [Ma3]) aroused interest not only in Japan, but also in other countries such as Romania, Hungary, Canada and the USA, where schools of Finsler geometry are founded and are presently widely recognized.