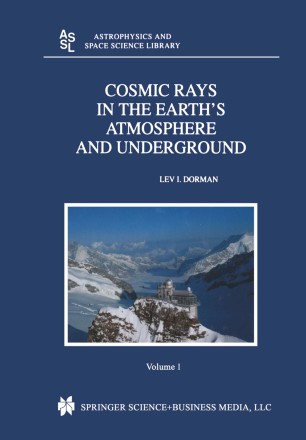 Cosmic Rays in the Earth’s Atmosphere and Underground

The present monograph as well as the next one (Dorman, M2005) is a result of more than 50 years working in cosmic ray (CR) research. After graduation in December 1950 Moscow Lomonosov State University (Nuclear and Elementary Particle Physics Division, the Team of Theoretical Physics), my supervisor Professor D. I. Blokhintsev planned for me, as a winner of a Red Diploma, to continue my education as an aspirant (a graduate student) to prepare for Ph. D. in his very secret Object in the framework of what was in those time called the Atomic Problem. To my regret the KGB withheld permission, and I, together with other Jewish students who had graduated Nuclear Divisions of Moscow and Leningrad Universities and Institutes, were faced with a real prospect of being without any work. It was our good fortune that at that time there was being brought into being the new Cosmic Ray Project (what at that time was also very secret, but not as secret as the Atomic Problem), and after some time we were directed to work on this Project. It was organized and headed by Prof. S. N. Vernov (President of All-Union Section of Cosmic Rays) and Prof. N. V. Pushkov (Director of IZMIRAN); Prof. E. L. Feinberg headed the theoretical part of the Project.