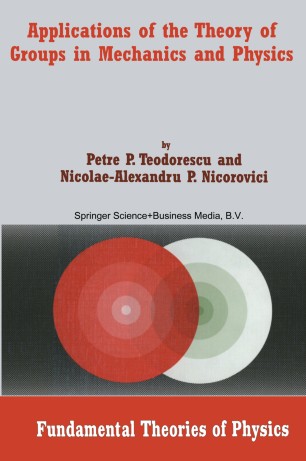 Applications of the Theory of Groups in Mechanics and Physics

The notion of group is fundamental in our days, not only in mathematics, but also in classical mechanics, electromagnetism, theory of relativity, quantum mechanics, theory of elementary particles, etc. This notion has developed during a century and this development is connected with the names of great mathematicians as E. Galois, A. L. Cauchy, C. F. Gauss, W. R. Hamilton, C. Jordan, S. Lie, E. Cartan, H. Weyl, E. Wigner, and of many others. In mathematics, as in other sciences, the simple and fertile ideas make their way with difficulty and slowly; however, this long history would have been of a minor interest, had the notion of group remained connected only with rather restricted domains of mathematics, those in which it occurred at the beginning. But at present, groups have invaded almost all mathematical disciplines, mechanics, the largest part of physics, of chemistry, etc. We may say, without exaggeration, that this is the most important idea that occurred in mathematics since the invention of infinitesimal calculus; indeed, the notion of group expresses, in a precise and operational form, the vague and universal ideas of regularity and symmetry. The notion of group led to a profound understanding of the character of the laws which govern natural phenomena, permitting to formulate new laws, correcting certain inadequate formulations and providing unitary and non­ contradictory formulations for the investigated phenomena.