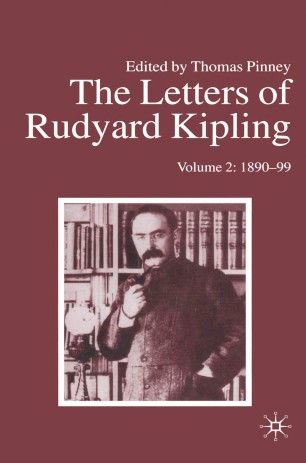 The Letters of Rudyard Kipling

Kipling's letters, never before collected and edited and largely unpublished, are now presented in an annotated edition based on the more than 6,000 letters preserved in public and private collections all over the world. Planned in an edition of four volumes, the Letters reveal Kipling with a fullness and immediacy of detail unmatched by any other source. The first two volumes present the first half of Kipling's life, down to the end of the nineteenth century. They show the remarkable transformation of the young schoolboy into the seasoned Indian journalist, and the even more remarkable transformation of the Indian journalist into the famous writer, the most dazzling literary success of the 1890s. Kipling's hard years of apprenticeship, his restless travels and eager encounters with cities and men, his triumphant struggles in the literary wars, are all vividly set forth. The Letters also take Kipling through his marriage and the births of his children, through the mingled happiness and distress of his American years, to the tragedy of his daughter's death at the very highest moment of his literary fame.