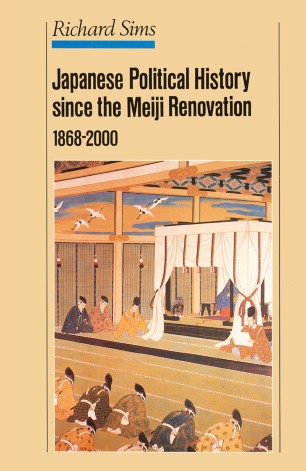 Japanese Political History Since the Meiji Restoration, 1868-2000 explores, through a combination of narrative and analysis, the changes in the political process which lay behind Japan's transformation into a modern nation state; its successive turn toward militarism, fascism, and the Pacific War; and the imposition of a fully democratic constitution. Sims examines closely such central topics as the Meiji renovation, samurai modernisers, the rise of liberal political parties, the Meiji constitution, 'Taisho democracy', the wartime changes in the political system, postwar reforms and the 'reverse course', four decades of Liberal Democratic rule, and the shake-up of Japanese politics during the 1990s. No other book has covered Japanese political history over the entire period since 1868 in such detail, and the present volume aims to fill the gap between the various general histories of modern Japan and the ever-increasing monographic literature.

RICHARD SIMS has taught modern Japanese history at the School of Oriental and African Studies since 1966. His previous books include Modern Japan (1973) and French Policy towards the Bakufu and Meiji Japan, 1854-1895 (1998).