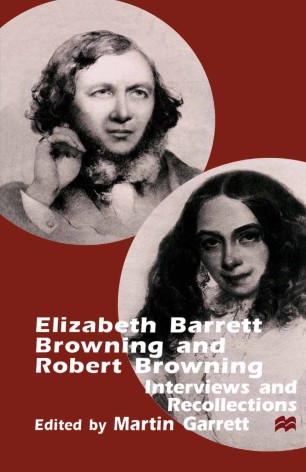 Elizabeth Barrett Browning and Robert Browning: Interviews and Recollections gathers accounts of the two poets from her precocious childhood to his death in Venice. Comments by Nathaniel and Sophia Hawthorne, Alfred Tennyson, Henry James, Edmund Gosse and the Brownings themselves are included together with the reports or recollections of many less well known contemporaries. There is material on Barrett Browning's relationship with her father, her spiritualism, appearance, ambitions and convictions as a poet, and `devotion to and faith in the regeneration of Italy'; and on Browning's early friendship with Carlyle, his fraught relationship with Macready and the theatre, his love of fine clothes and society, and work habits. Some contemporary accounts construct, while others reject or qualify, familiar images of the poets: Barrett Browning as the frail, safely female recluse, for instance, or Browning as the loud and trivial talker who was so different from his poetry that for James there were simply `two Brownings'.