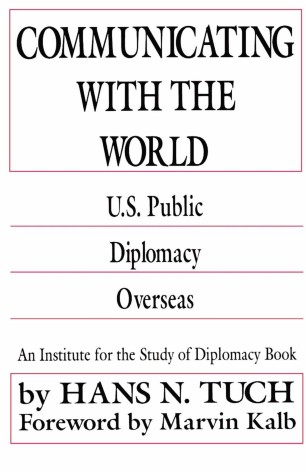 Communicating with the World

"Communicating with the World" defines and examines public diplomacy in the context of a government's conduct of foreign affairs and identifies its rationale as an outgrowth of the worldwide communications revolution, ideological conflicts, and the interdependency of nations. The book explains the evolution of U.S. public diplomacy since World War II in terms of enabling legislation, the actions of successive directors of the U.S. Information Agency (USIA). In particular, it concentrates on the specific ways in which the U.S. government practices public diplomacy through its diplomatic missions abroad, noting the role of the ambassador and the "country team" and the importance of dialogue - the two-way learning experience of public diplomacy. Several chapters analyze the methods and media employed in conducting public diplomacy, such as press, publications, libraries, lectures, exhibitions, and educational and cultural exchange programs. Separate chapters discuss the uses of radio (the Voice of America) and television. The book details how public affairs officers and their staffs at U.S. diplomatic missions select the audiences for each of these approaches and identify and present specific issues in terms of specific target groups. The author demonstrates the responsibility of public diplomats to advise Washington and its ambassadors in the field on the intercultural implications of U.S. foreign policies and actions and their effect on foreign public opinion. He offers a critique of current U.S. public diplomacy practices and four detailed case histories, drawn from his thirty-five years' experience in the Foreign Service.