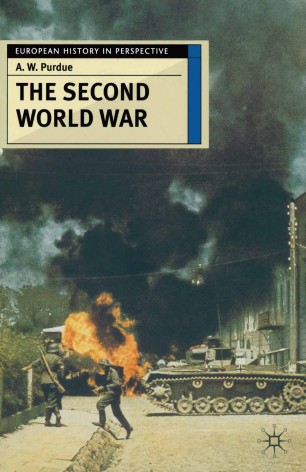 Part of the European History in Perspective book series

The Second World War ended the Nazi domination of Europe and Japanese aggression in the Asian Pacific but created two superpowers and another world crisis, the only recently concluded 'Cold War'. What were the causes of this, the second major conflagration in 20 years? How did the war progress, and could the Axis powers have succeeded? What were the consequences of a conflict that cost the lives of 53 million people, left many countries devastated and led to the creation of a bi-polar world?
This study provides a fresh assessment of the entire course of World War II, covering both the European and the Asian Pacific conflicts, and argues that the combination of a hard-won victory and the onset of the Cold War provided a frozen perspective of 'winners' history', which has endured until the collapse of the Soviet Union and the reunification of Germany. AW Purdue reassesses the war, fully engaging with the latest scholarly research, and critically analyses the key debates, including whether the war was, along with World War I, a 'Thirty Years War', the responsibility of Adolf Hitler, the significance of ideology and the extent of opposition to Hitler's 'New Order'.