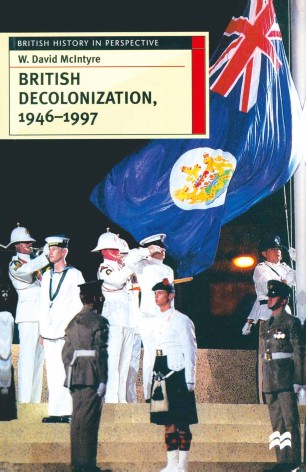 When, Why and How did the British Empire Fall?

The sudden demise of arguably the world's greatest empire in the years following the Second World War was a momentous event in global history. After nearly four centuries of colonial activity, the British relinquished their empire in a little more than twenty years.
In this comprehensive new survey, David McIntyre narrates the sequence of decolonisation, summarises the historical controversies surrounding its causes, and considers what was distinctive about the way events unfolded. The author argues that although colonial self-government had a long pedigree going back to the American colonies (and Dominion status had become a peaceful evolutionary route to independence), the upsurge of colonial nationalisms after 1945 meant that policy-makers were overtaken by events. The great speed at which the numerous dependencies in Asia, Africa, the Caribbean and Pacific were relinquished is analysed and the Commonwealth since decolonisation reconsidered, revealing an association displaying surprising vigour in its post-Britannic years.