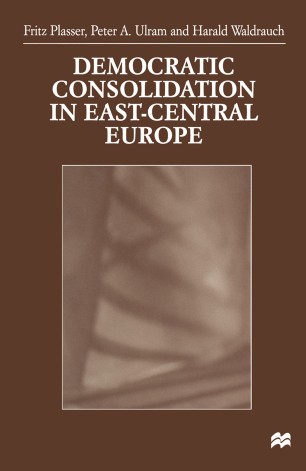 The postcommunist regimes in East-Central Europe are confronted with the double challenge of establishing a democratic order and a market economy. The book discusses the concepts of democratic consolidation and analyzes the development of attitudes towards the political and economic system in Poland, Hungary, the Czech Republic, Slovakia and Slovenia. The study compares the political values in East-Central Europe with respective attitudes in the USA and Western Europe. Special attention is given to experiences of the consolidation process in Germany, Italy and Austria after 1945 as well as the more recent developments in Latin America and Southern Europe. The final chapter discusses patterns and paths of democratic consolidation in the light of concepts of regime change.

FRITZ PLASSER is Professor of Political Science at the University of Innsbruck and Director of the Center for Applied Political Research in Vienna. He has been author, co-author and editor of fourteen books and has written widely on comparative politics and democratic consolidation.

PETER A. ULRAM is Head of Social Research Department (Fessel-GfK Austria) and Euromanager for Social Research (GfK-Europa). He has published widely in the democratic transformation and transition in Eastern Europe, political culture and electoral research.

HARALD WALDRAUCH is a research assistant in political science at the Institute for Advanced Studies in Vienna, Austria. He is currently completing his doctoral research on the relationship of legitimacy, political support and processes of democratic consolidation in post-transitional settings. He is also involved in several research projects on the integration of international migrants.