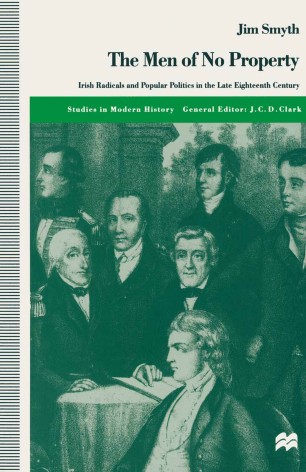 Irish Radicals and Popular Politics in the Late Eighteenth Century

The paperback edition of the extremely popular The Men of No Property is a study of the popular dimensions of Irish radicalism in the age of the French revolution. It focuses on the lower-class secret society, the Defenders, and the more familiar face of radicalism in this period, the Society of United Irishmen. Particular attention is paid to the vigorous traditions of street protest in eighteenth-century Dublin. The picture which emerges is of a revolutionary movement which was both more radical in its rhetoric and objectives and more popular in its social base than has previously been allowed.

JIM SMYTH, a graduate of Trinity College, Dublin and Cambridge University, is Associate Professor of Irish and British History at the University of Notre Dame. Formerly a Research Fellow at Trinity Hall, Cambridge, Dr Smyth has taught at Christ Church, Oxford, and Robinson College, Cambridge.