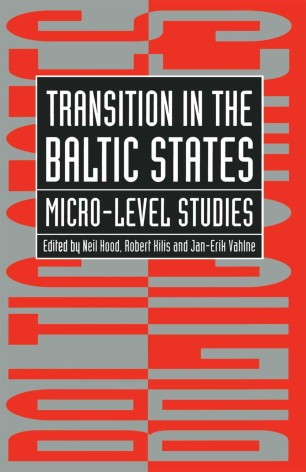 Transition in the Baltic States

Much has been written about the speed and complexity of the transition throughout Central and Eastern Europe and former parts of the Soviet Union. The focus has invariably been on the macro scale and often from the perspective of a single discipline. This book differs from others by concentrating on the micro level of change and doing so from a wide range of disciplinary perspectives, recognising that transformation processes are multiplex and require the linkages between the social, political, psychological, cultural and economic dimensions to be fully exposed and addressed.

ROBERT KILIS is Assistant Professor at the Stockholm School of Economics in Riga, Latvia, where he teaches economic anthropology. His research interests include social aspects of entrepreneurship and cultural transmission in the Baltic states.

JAN-ERIK VAHLNE is Professor of International Business and was formerly Rector of the Stockholm School of Economics in Riga, Latvia. He is now, on behalf of Goteborg University, preparing for the establishment of a new business school to be called the Goteborg Graduate Business School. He has published widely on many aspects of international business.