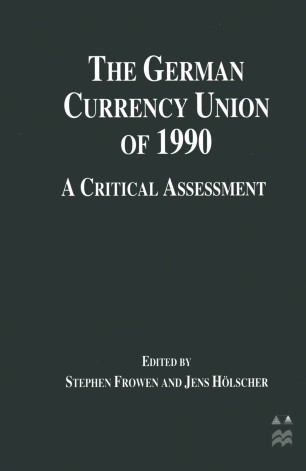 The German Currency Union of 1990

The book assesses the most exciting experiment in modern economic history - the German currency union of 1990 - on three levels. Firstly the international consequences are analysed utilising different paradigms of monetary theory. These controversial results lead to a closer look at the relationship between monetary policy and production in Germany, and thirdly, the book concludes with a reconsideration of the old economic question, whether money matters, applied to the German case.

JENS HÖLSCHER is DAAD Senior Fellow in Economics at the Institute for German Studies, University of Birmingham. He was previously Lecturer at the University of Wales, Swansea and Assistant Lecturer in Berlin. He has published several economics books in German, amongst them Entwicklungsmodell Westdeutschland and Conditions of Economic Development in Central and Eastern Europe, Vols 1-5.