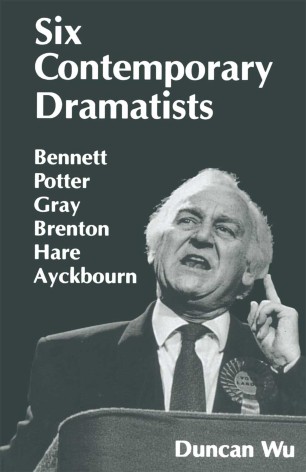 `A most illuminating study.' - John Bayley Six Contemporary Dramatists explores, in a straightforward manner, the central concerns of six of the most important contemporary dramatists. It demonstrates how the work of Alan Bennett, Dennis Potter, Simon Gray, Howard Brenton, David Hare and Alan Ayckbourn is essentially moral, and relates their aspirations to the British romantic tradition of the last century. At the same time, Duncan Wu explores how each writer has responded to the changes that took place in personal and public ethics during the 1980s as a result of Thatcherism. He also includes an interview with Alan Ayckbourn, published here for the first time, in which the volume's themes are focused and summarised. For the paperback edition, a substantial preface discussing Tom Stoppard's Arcadia, David Hare's Skylight and David Edgar's Pentecost has been added. This is an essential and readable guide to televised and theatrical drama for students and theatregoers alike.