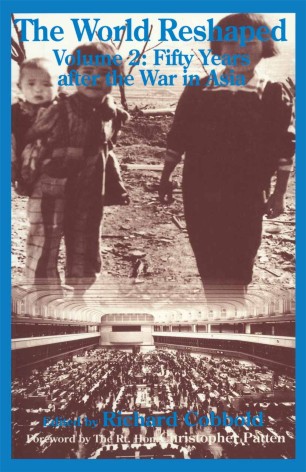 Volume 2: Fifty Years after the War in Asia

Half a century ago, much of Asia lay in ruins, shattered by the long years of total war. Fifty years later, much of the region has been transformed. Asia today is an economic powerhouse, generating wealth and prosperity on an enormous scale. An increasing number of Asian countries have embraced a market economy and adapted their political structures to accommodate the resulting economic and social changes. The so-called 'Asian Dragons' are roaring ahead. Japan, then Singapore, Hong Kong, Taiwan and South Korea led the way, followed more recently by countries such as Malaysia, Indonesia and Thailand, and now Vietnam and the Philippines are set to join the dragon family. Economic revolution in China, combined with the steady liberalization of the Indian economy, will spur future economic growth, not just in Asia but in the world. This volume investigates the economic, military and political aspects of the remarkable developments in this part of the world over the past fifty years. It also looks tentatively into the future, to hazard a guess at what the next fifty years may hold.