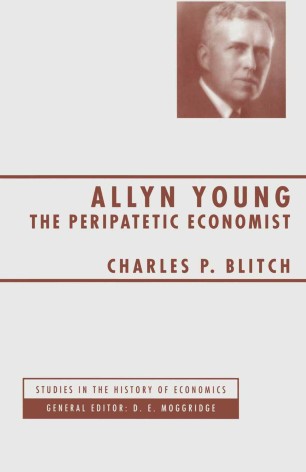 `This careful and long-overdue biography fills us in on the life and work of an American economist who was important during the first three decades of the century. The book is especially timely because Young's seminal article (1928) on increasing returns is now widely acknowledged to foreshadow much of the modern analysis of edogenous growth and related inquiry.' - James M. Buchanan, George Mason University Allyn Young was one of the most prominent and influential economists in the interwar period. His influence came largely through the work of his students: Frank Knight, Holbrook Working, Edward Chamberlin, Seymour Harris and others. He held professorships at Stanford, Cornell, and Harvard Universities among others. His public service included chief economic advisor to the American delegation at the Paris Peace Conference in 1919. This book provides the first full study of Allyn Young's life and work. It presents detailed expositions of his papers on demographics, value theory, depreciation, taxation, index number theory, and increasing returns. It is a straightforward analysis of the life and work of one of the most fascinating economists of this century.