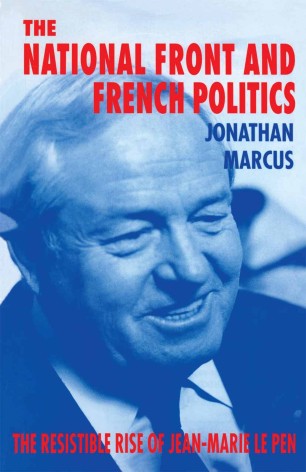 The National Front and French Politics

'Jonathan Marcus...stands out from most of his colleagues in the media by making a case for the non-alarmists. His National Front and French Politics is a throughtful study, which in the end, provides a more effective refutation of the myths peddled by Le Pen than would an angry pamphlet.' - Henri Astier, Times Literary Supplement `Jonathan Marcus's comprehensive account provides plenty of analysis to go with the factual background to the rise of Le Pen and the NF. There are particularly good chapters on the many strands of far-right opinion, from collaborators to extreme Catholics who eventually found a home with the new party.' - Andrew Bell, BBC Worldwide 'I am convinced that the book will be extremely valuable to all English-speaking students of contemporary French politics.' - Stanley Hoffmann, Harvard University The extreme right-wing National Front is now France's fourth largest political party. At the 1988 Presidential election, its leader Jean-Marie Le Pen obtained over 14 per cent of the popular vote. Le Pen's xenophobic anti-immigrant message has attracted significant support in France. This book examines the rise of Le Pen's party, and its impact on the French political scene. How far is it a threat to French democracy? And is the National Front now a permanent feature of French politics?