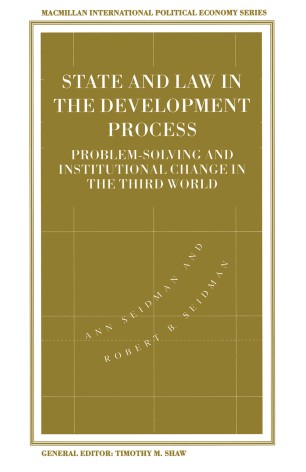 State and Law in the Development Process

Problem-Solving and Institutional Change in the Third World

'Ann and Robert Seidman have written an invaluabe theoretical (and practical) guide for those concerned with the role of the state in development.'- Bereket Habte Selassie, Professor of African Studies, Howard University 'State and Law in the Development Process is a scholarly work and essential reading for undergraduate and postgraduate students taking courses on the Third World, its history and development. It provides an excellent bibliography and analysis which sets out the fundamentals of research into the future development of the Third World. Expertly written, it embodies a research methodology which is linked to a theoretical perspective.' - John F. McEldowney, Senior Lecturer in Law, University of Warwick The post-1945 collapse of colonialism and the emergence of new nationalist governments seemed to promise plenty for all third-world peoples. Four decades later, those promises lay in shards. This book proposes a theory to explain the failure of third-world states to transform the institutions that produce poverty and powerlessness for the mass of the population. Based on that theory, it proposes a methodology designed to facilitate the democratic exercise of state power through law to empower third world peoples to play an effective role in building a peaceful world of plenty for all.