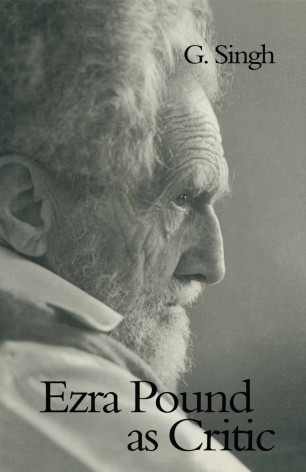 'G. Singh's cleanly read monography gives testimony to Pound's sense of criticism.' - Ian Bell, Times Higher Education Supplement 'Pound's criticism is as important to modern poetry as his own poetry. There is no book dealing with his criticism, either in England or in Italy, which presents it so lucidly and so convincingly as Singh's does.' Carlo Bo Examining with Pound's literary criticism as a whole, this new study discusses his critical tenets and concepts as well as his critical evaluations of Arnaut Daniel, Dante, Cavalcanti, Villon, Chaucer, Shakespeare, Milton, Thomas Hardy, Henry James, Yeats, Joyce, T.S. Eliot and Wyndham Lewis. Singh also comments analytically on Pound's critical credo, his poetics of imagism, his letters in criticism, his theory and craft of poetic translation and his views on modern French poets and prose writers. The conclusion is followed by a selection of Poundian maxims and aphorisms.