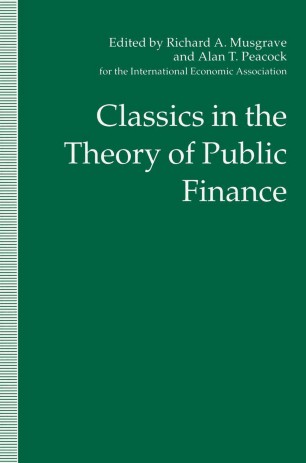 This book was prepared mainly for specialists on the assumption that it would provide the background to an important neglected field of discussion in public finance. Since it was first published in 1958, the theory of public goods and its implications for public policy have become incorporated in the main body of the economic analysis of public finance in the literature. A glance at the footnotes of some of the standard textbooks on public finance indicates that this assembly of articles has not been in vain. Probably the most influential part of this collection has been the papers concerned with the theory of public expenditure, which contains two closely related elements. The first is as a part of welfare economics: under what conditions can Pareto optimality be achieved in an economic system in which some goods supplied are indivisible? The other strand of thought is concerned with the positive theory of the public sector: how can economic analysis be used in order to explain how the size and composition of the budget is actually determined?