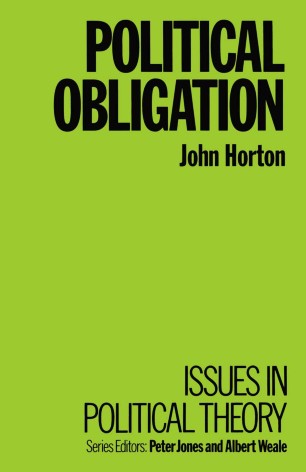 Part of the Issues in Political Theory book series

The proper relationship between the individual and the wider political community is an issue which is both practically important and philosophically perplexing. Do we have an obligation to obey our government? If so, what is the basis of this obligation and what are its limits? These are questions which lie at the heart of the problem of political obligation.

Historically, political philosophers have offered many and various answers to these questions. Some have thought that political obligation must be based on a voluntary undertaking to obey; others have argued that it derives from a general requirement to promote the common good or maximise well-being; and still others that it follows from a duty of fairness or justice. By contrast, anarchists have mostly denied that we have any such obligations to the polity at all.

This book assesses the validity of these claims and the arguments for them. It seeks to show that all the traditional accounts of political obligation, including the anarchist denial of it, are in various ways unsatisfactory. Instead, it defends an account of political obligation which gives particular prominence to what it involved in being a member of a political community and challenges the reader to think through what it is to have a political identity as a member of a particular society, and the implications of this for how one should act.