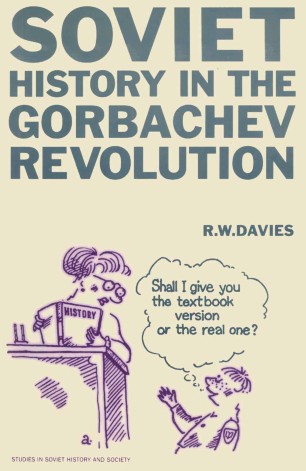 Soviet History in the Gorbachev Revolution

Part of the Studies in Soviet and Society book series (SREEHS)

Since Gorbachev took office in 1985, every aspect of the Soviet past has been under scrutiny. Tens of millions of Soviet citizens are eagerly absorbing and debating the vast outpouring of novels, books and articles, and films and TV programmes, about their past. Much new information has appeared, often sensational, about how the Stalin regime worked and what it meant for top politicians, generals, intellectuals and ordinary citizens. Stalinists, Russian nationalists, democratic socialists and others are locked in bitter debate. Was the victory of Stalinism inevitable? Was there an alternative road to socialism? Even Lenin and his policies are now questioned. The Politburo itself is deeply divided about how far the debate should go and what conclusions should be drawn from it. The reconsideration about the past is part of the discussion about the way forward for Soviet society: how big should be the role of the market? How much freedom and democracy?