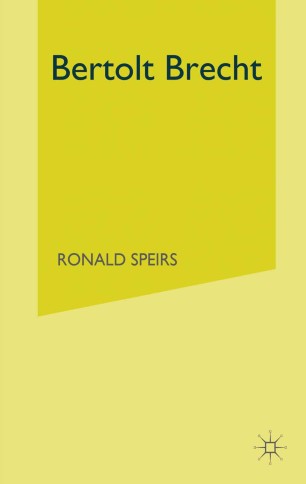 Brecht's reputation, which is now world-wide, rests principally on his contribution to political theatre in the twentieth century. He is known, not only for such major plays as Mother Courage and her Children, The Life of Galileo, The Good Person of Szechwan, or The Caucasian Chalk Circle, and for the concepts of 'Epic Theatre' or the 'alienation effect', but also for the exemplary productions with which the Berliner Ensemble scored successes both at its home in East Berlin and on its influential tours throughout Europe. However, Brecht also produced important work in the 1920s, before he became a committed political dramatist. This study therefore surveys his whole development, considering both the continuities and the discontinuities between his earlier and his later, Marxist, work examining critically the relations between theory and practice, and studying the major plays in detail. It argues that Brecht's procedures both of writing and production are better understood as rhetorical strategies than as 'scientific' demonstrations. '...Dr Speirs provides a balanced amount of description and of analysis, which together with details of productions (supported by eight pages of illustrations) will stimulate students of Brecht's drama as literature, as well as those interested in performance. A valuable addition to any school or college library, it is also at its very reasonable paperback price, a book which all Brecht enthusiasts will be able to purchase.' Times Educational Supplement.