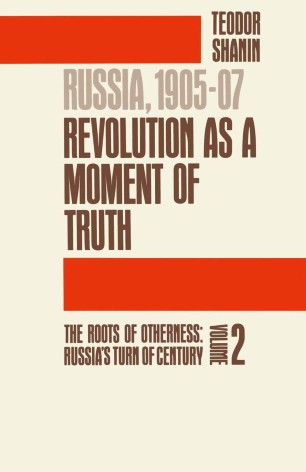 Volume 2: The Roots of Otherness: Russia’s Turn of Century

New Russia begins in 1905-07. A revolution which failed was also a moment of truth. By proceeding in a way unexpected by supporters and adversaries alike it offered a dramatic corrective to their understanding of Russia. In what followed Russian history was to be dominated by the transforming efforts of monarchists who learnt that only 'revolution from above' could save their tsardom and by Marxists who, under the impact of revolution which failed, looked anew at Russia and their Marxism. On the opposing sides of the political scale, Stolypin and Lenin came to share a new image of Russia recognisable today as one of a 'developing society', and to act upon that. While Russia began a new century with a revolution, it is equally true that a new century in world history began with the Russian revolution of 1905-07. Since then a new type of society and of revolution have been evident throughout the world. Most of the theoretical tools to grasp those environments and changes were first set in Russia of the period described. The book begins with the forces and elements which came together in the 1905-07 revolution. It then presents and analyses the urban struggle, the still little known peasant war and the relations between those two confrontations. It proceeds to the conclusions drawn from the revolution by the different social classes, parties and leaders and the way this has shaped Russia's future and consequently of the world today, defining also economics and agrarian reforms, developmentism and communism, liberation struggles and anti-insurgencies.