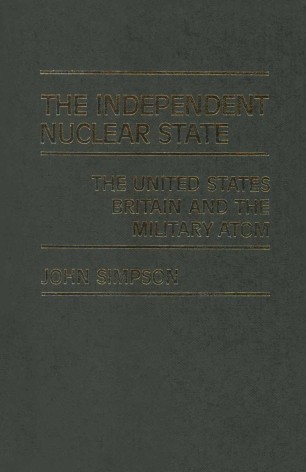 The United States, Britain and the Military Atom

The Independent Nuclear State: The United States, Britain and the Military Atom is a chronological account and overview of the 40-year history of British military research, development and production work in atomic energy. The United Kingdom's efforts in this field have always had close links with equivalent activities in the United States, and have often been conducted on a mutually co-operative basis. Through its description of these secret Anglo-American interactions, this study serves to highlight the degree to which the public debate in Britain over nuclear weapons has been conducted in a vacuum, as has American public policy-making over its nuclear links with the United Kingdom. This book contains descriptions of the technical evolution of British nuclear weapon designs and production models, estimates of annual output figures for fissile material and weapon types, and indications of the nature of the weapon-testing programme. Decision points are charted, such as the H-bomb development, and the factors that led to existing plans being changed are identified. The demonstrative nature of the programme until the late 1950s is illustrated, together with the rapidity with which the stockpile targets were met at the turn of that decade. The impact of the agreements with the United States, both upon weapon development and production programmes and upon stockpiling is analysed, as well as their effects upon the nuclear submarine programme. The consequences of the mid-1960s termination of weapon development are discussed, as it the later decision to restart it for the Chevaline programme. The impact of these events upon Anglo-American relations is identified, together with the recent British attempts to move to a closer political association with Europe. The study concludes by evaluating the essential nature of four decades of United Kingdom military nuclear development, and identifying the practical limits imposed by past policies upon any attempt by a British government to implement a policy of unilateral nuclear disarmament.