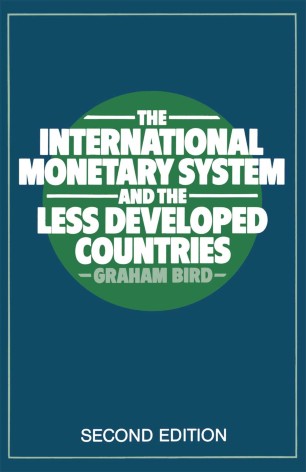 The International Monetary System and the Less Developed Countries

In this book the author investigates the relationship between the international monetary system and the less developed countries of the world. In the period since 1945 growing concern has been shown over the international monetary problems which LDCs face, and since 1971 LDCs have been significant participants in the reform of the international monetary system. After tracing the evolution of the relationship between LDCs and the International Monetary Fund, the book goes on to examine, with full reference to the available empirical evidence, the major causes and consequences of LDCs' international monetary problems. Topics covered include: export instability; the terms of trade; the demand for reserves and reserve adequacy; and adjustment difficulties. A thorough examination is then made of the ways in which financial assistance has been provided to LDCs through the IMF and the Eurocurrency market. Finally, certain key policy issues are discussed: the commodity problem; the link between the creation of international liquidity and the provision of development aid; and exchange rate policy. Each chapter is followed by an extensive bibliography which is designed to help the reader to pursue further any topic of particular interest. The presentation, which is non-mathematical, is in the form of a textbook. The issues are surveyed, the main arguments discussed, and the available empirical evidence presented. It is revealed, however, that on many issues it is at present difficult to draw firm conclusions. The book will be of interest to students of international, monetary, and development economics.

GRAHAM BIRD is a graduate of the University of Cambridge, is Senior Lecturer and Course Director in Economics at the University of Surrey. He is the author of numerous publications dealing mainly with aspects of international finance and economic development, and is currently preparing two further books in this general area. Mr Bird is also a Reseach Associate at the Overseas Development Institute, where he is working on a project entitled The International Monetary Fund and Economic Management in Developing Countries.