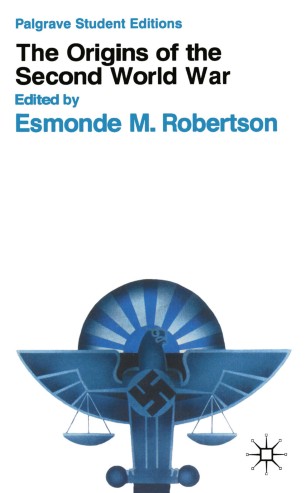 The Origins of the Second World War

This collection of essays deals with some of the problems posed by the origins of World War II. Was World War II part of a developing world crisis or should it be seen purely in a European context? Before 1960 general historical opinion held that World War I 'broke out', World War II was 'precipitated'. Fritz Fischer's and A.J.P Taylor's challenge to this thesis caused a controversy which made it impossible to isolate the causes of the two World Wars.

Whether Hitler was an opportunist or a planner (or both) is discussed in a series of articles, the introduction to which considers the irrational element in Hitler's character and the contradictions in his policy. One author presents Hitler's attitude towards Japan and offers reasons why there was so little collusion between Germany and Japan before the end of 1937. Readers are introduced to the ideas of both American and Japanese writers as to the causes of the 'China Incident' of July 1937 and its influence on European politics.

Other topics presented include Mussolini's role as an 'icebreaker' for Hitler; Chamberlain's policy of appeasement; the Rome Agreements of 1935 which caused a rift between Britain and France over Ethiopia; Hitler's attitude towards Japan; Roosevelt's movement of the U.S. Fleet; the defeat of France; the Japanese occupation of Indo-China; and other key issues. A plea for historians of the former belligerents to meet periodically in small groups to discuss research concludes this volume.