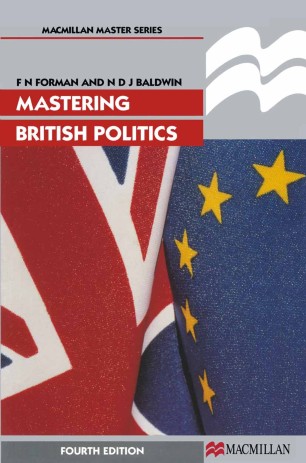 This essential book contains all the information and analysis needed to understand the British system of Government and British politics. The fourth edition has been extensively re-written and up-dated. New material has been added throughout, in particular to take into account changes since the 1997 General Election. It also contains an analysis of results of the 1997 Election, and constitutional changes under the new Labour Government. Mastering British Politics is easy to read and clearly explained, avoiding difficult or over-technical language. It contains questions throughout to guide discussion and suggestions for further reading. It is ideal for A-Level and first-year undergraduates, and for anyone wanting to know how the British political system really works.

F.N. FORMAN has taught British politics at college and university level. He was a Member of Parliament from 1976 to 1997 and served as a P.P.S. in the Foreign Office and the Treasury, and was also a Minister for Further & Higher Education.

N.D.J. BALDWIN has written and lectured extensively on British politics. A former Parliamentary candidate and one-time assistant to a group of peers in the House of Lords, he is currently Director of Wroxton College in Oxfordshire, the British campus of Farleigh Dickinson University.