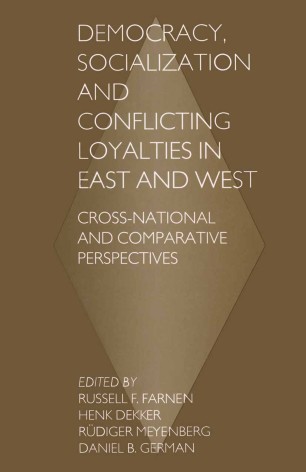 Democracy, Socialization and Conflicting Loyalties in East and West

The 22 essays in this volume discuss contemporary trends in democratization, nationalism, political socialization, authoritarianism, and other topics such as conflicting loyalties in Europe and the US. Since there are seven different countries represented among the authors who have contributed to this volume, they have produced a unique, international, comparative and cross-national research perspective on significant issues in contemporary politics, socialization, and education. This book provides an interesting collection of empirical research findings and scholarly syntheses of quantitative and qualitative research efforts. Major emphasis in these studies is on the impact of socialization forces and political socialization of youth from various sources. Some research studies are quasi-longitudinal, treating different regions in Europe, and emphasizing significant themes such as racism, intolerance, xenophobia, the European Union, and democratic political philosophy and citizenship.