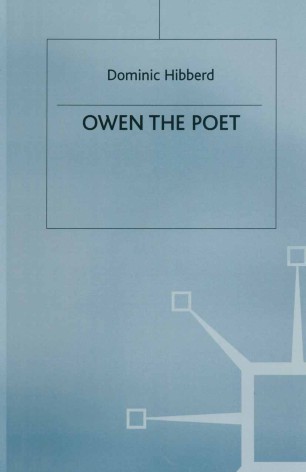 Wilfred Owen's poetry is now very widely known as the finest that came out of the First World War. But much about the poet and his work has not been fully understood. This book, based on unrivalled research, is the first to study of Owen's complete poetic achievement, revealing the uniqueness, strangeness and unity of what he called his 'poethood'. His war poems are shown to be a consistent development from his prewar verse and his unswerving allegiance to Romanticism; they grew out of a pattern of mythologised secret experience that took shape in some of his least-known manuscripts before he knew anything of the trenches. Owen lived for poetry; many unfamiliar aspects of that life are brought into focus, including his early discovery of Georgianism, his battle wirh Revivalist religion, his debt to the French Decadence, his alleged cowardice, the torment of his shellshock and the remarkable 'sociological' treatment he received for it, his sexual nature and his friendship with Oscar Wilde's beleaguered disciples in 1918, and his supreme courage in making poetry out of inner horrors deliberately 'recollected in tranquility'. Learning from Wordsworth and Shelley, Aesthetes and Decadents, Sassoon and the Georgians, Hardy, Barbusse, Russell, Edward Carpenter and many others, Owen realised his life's ambition and became a profoundly origianal poet. Owen the Poet ends with chapters on two of his richest works: 'Strange Meeting', his worst shellshock nightmare, and 'Spring Offensive', the epilogue to all he wrote. Notes, appendixes and bibliography complete what is likely to be the most authoritative book on its subject for many years to come.