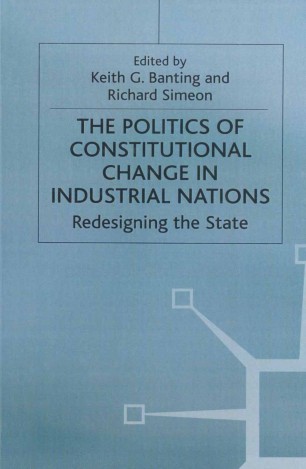 The Politics of Constitutional Change in Industrial Nations

During the last two decades serious attempts to alter basic constitutional structures have taken place in many industrial nations, even in those often thought to have highly stable political institutions. In some cases, such as Belgium and Spain, far-reaching constitutional changes have been put in place; in others advocates of reform have achieved only partial victories or have been entirely frustrated. In all cases, controversy over the constitution has been intense, involving basic conceptions of legitimacy, representation, sovereignty and the purposes of the state. Constitutional politics often reveals much about political life of modern societies that is obscured in day-to-day events. The results of constitutional changes can significantly affect the distribution of power, the ability to manage conflict and the outcomes of policy debates. This book explores the dynamics of constitutional politics through case studies of Spain, Belgium, Canada, the United Kingdom, the United States, West Germany and Eastern Europe, including Poland, prepared by leading students of these countries. Other chapters draw out the more general patterns of constitutional politics, highlighting the pressures which lead to change, and the formidable obstacles confronting them.