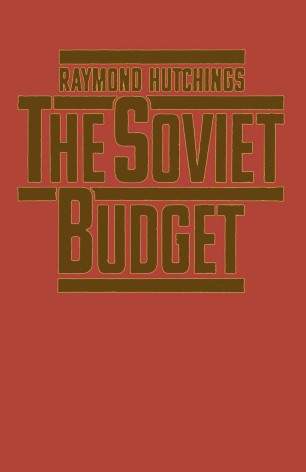 How much does the Soviet Union spend on defense, economic development, social welfare, and education? How does it finance the enormous scale of its expenditures under all these heads? What typical sequences are disclosed, and how do they mesh with other types of behavior in the Soviet economy? Can one even believe the official figures? If so, what do they tell us? If not, in which directions may they need to be corrected? Has the degree of secretiveness varied over time? (Evidence is adduced to show that it has.) What are the branch and territorial components of the budget, and how are they put together, under which pressures and within which timescale? What is the budget s legal status, and how is it affected by legislative procedures? In this in-depth investigation into the scope, structure, and meaning of the Soviet budget, Raymond Hutchings answers these questions. Based largely on an intensive analysis of quantitative series built up over a very long period, this book contributes to understanding the Soviet economy from an angle made possible by no other approach. Students of the Soviet economy, economists, and specialists in international affairs will find the book s data, conclusions, and methods of analysis extremely useful."