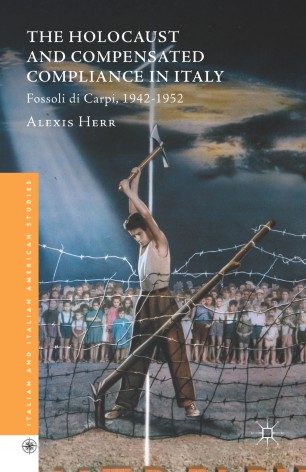 The Holocaust and Compensated Compliance in Italy

This book analyzes the role and function of an Italian deportation camp during and immediately after World War Two within the context of Italian, European, and Holocaust history. Drawing upon archival documents, trial proceedings, memoirs, and testimonies, Herr investigates the uses of Fossoli as an Italian prisoner-of-war camp for Allied soldiers captured in North Africa (1942-43), a Nazi deportation camp for Jews and political prisoners (1943-44), a postwar Italian prison for Fascists, German soldiers, and displaced persons (1945-47), and a Catholic orphanage (1947-52). This case study shines a spotlight on victims, perpetrators, Resistance fighters, and local collaborators to depict how the Holocaust unfolded in a small town and how postwar conditions supported a story of national innocence. This book trains a powerful lens on the multi-layered history of Italy during the Holocaust and illuminates key elements of local involvement largely ignored by Italian wartime and postwar narratives, particularly compensated compliance (compliance for financial gain), the normalization of mass murder, and the industrialization of the Judeocide in Italy.