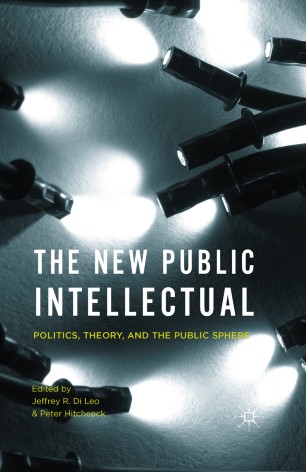 Politics, Theory, and the Public Sphere

What are the theoretical parameters that produce the category public intellectual? By pondering the conceptual elements that inform the term, this book offers not just a political critique, but a sense of the new challenges its meanings present. This collection complicates the notion of public intellectual while arguing for its continued urgency in communities formal and informal, institutional and abstract. While it is not quite accurate to say public intellectuals have disappeared entirely, it is clear they function differently in an age of global neoliberalism and techno-digital overdrive. Today the idea of the public intellectual bears only the slightest resemblance to what it was fifty or even twenty-five years ago. The essays in this collection provide a number of different ways to imagine the fate of public intellectuals and offers a thorough exploration of the commonplace ideologies and politics associated with them.

Jeffrey R. Di Leo is Dean of Arts and Sciences and Professor of English and Philosophy at the University of Houston-Victoria, USA. He is founder of the critical theory journal symplok? and editor and publisher of the American Book Review.

Peter Hitchcock is Professor of English at The Graduate Center and Baruch College of the City University of New York, USA.

"Against those who claim that the public intellectual has died, this volume reignites a tradition that still speaks to contemporary political life. With original essays contributed by committed scholars who are public in their own right, The New Public Intellectual is a tour-de-force that revitalizes both the public and the intellectual as impossible to think without. Many today would declare that the public has been buried under the forces of technomediation, specialization, and celebrity culture, mass media, the star system, entertainment, and the corporatization of higher education. Di Leo and Hitchcock call together a group of scholars who kill off this sentiment and prove the urgency of updating Gramsci's and Foucault's view of the intellectual for the coming global age. Essential reading, this book is also a provocation towards rekindling the passionate engagement between critique and democracy." - Robin Goodman, Professor of English, Florida State University, USA

"This volume assesses the "new public intellectual" in an era when the majority of people seem more likely to turn to pundits, cable television stars, poll-obsessed politicians or billionaires for assessments of the world than to those who hone their abilities to produce reasoned, historically-grounded perspectives. It enters the fray by pondering the conceptual elements that inform the very term "public intellectual", and in so doing offers new perspectives on what is possible and, moreover, productive." - Robert F. Barsky, Professor of English, French and Italian, and Jewish Studies, Vanderbilt University, USA


"The venerable concept of the public intellectual (perhaps a mere pleonasm, as Simon Critchley observes here) is vanishing in front of our eyes. The courageous and thought-provoking essays gathered by Di Leo and Hitchcock make sense of this disappearance by presenting it less a symptom of late capitalism's cynicism or a consequence of our techno-digital skepticism about values than as a chance to rethink dynamically what we take to be our public space, which should be a space of contestation, challenge and confrontational dissensus." - Jean-Michel Rabaté, Professor of English and Comparative Literature, University of Pennsylvania, USA


"Since ours is a time when not even a Sartre or a Beauvoir can command authority to speak for the nation; when not even a Said or a Sontag, can inveigle their way into brief media stardom to highlight as briefly one worthy cause or other in the endless twenty-four seven news cycle; the question must become: What chance can there be for shaping democratic opinion to bring about more than superficial changes? This excellent volume goes a long way to demonstrating that there are other versions of the public intellectual, ones not limited to the pathetic masks of comic nerd, goofy policy wonk, computer geek, or rabid midnight blogger. Both analytically astute and critically inspiring, it will become a classic in the new culture of the future." - Daniel T. O'Hara, Professor of English and Mellon Professor of the Humanities, Temple University, USA