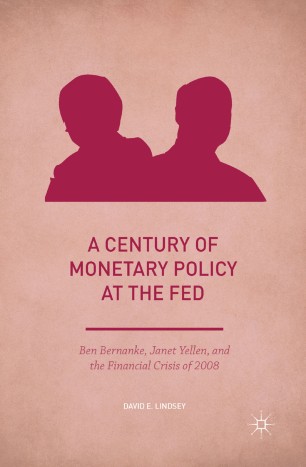 Ben Bernanke, Janet Yellen, and the Financial Crisis of 2008

In this narrative history, David E. Lindsey gives the reader a ringside seat to a century of policies at the US Federal Reserve. Alternating between broad historical strokes and deep dives into the significance of monetary issues and developments, Lindsey offers a fascinating look into monetary policymaking from the Fed's inception in 1913 to today.

Lindsey's three decades of service on the Federal Reserve Board staff allow him to combine the heft of scholarship with an insider's perspective on how the recent chairmen's and current chairwoman's personalities and singular visions have shaped policy choices with far-reaching consequences. He critiques the performances of Chairman Ben Bernanke and Vice Chair Janet Yellen during the prelude, outbreak, and aftermath of the financial crisis of 2008, situating them in the context of the Fed's century-long history. He also quantitatively explores an alternative to the conventional New-Keynesian theory of inflation, replacing so-called "rational expectations" with the Fed's inflation objective.

This unique volume is a piece of living history that has much to offer economists and monetary policy and finance professionals.

David E. Lindsey was a 29-year veteran of the Federal Reserve Board's senior staff when he retired in 2003. He became Associate Economist of the policymaking Federal Open Market Committee in 1984 and Deputy Director of the Division of Monetary Affairs in 1987. Lindsey received his PhD from the University of Chicago in 1970, writing his thesis under Nobel Laureate Milton Friedman.